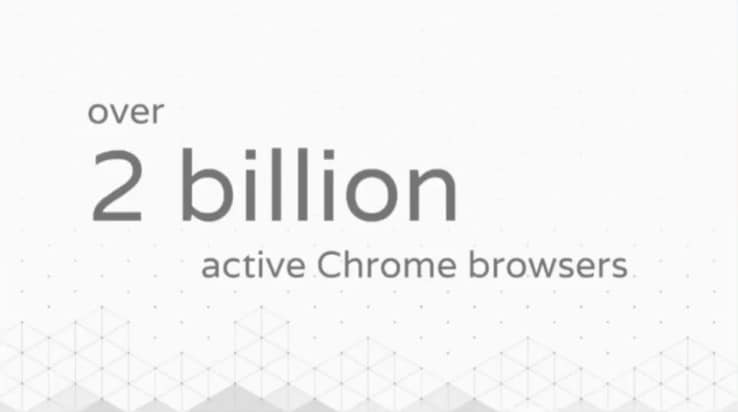 Google Chrome is undoubtedly one of, if not the best browser of all time. Fast load times, great collection of extensions that can be installed from the store, a minimalistic UI and with recent updates, low RAM consumption, these are just some of the features that set the Google Chrome apart from other browsers available to the Internet-savvy users.

Recently, Google held its Chrome Dev Summit at SFJAZZ Center in San Francisco. It is a 2-day event where developers can meet and engage in discussions with the Chrome Engineers. Usually, these events don’t have anything in store as far as news for the general public goes. However, Google announced something big this year.

2 billion active Chrome installs across all the platforms, announced Daren Fisher, Chrome’s Engineering Vice President. Just look at that number and imagine for a second that how far we had come since 2008 when the browser was first released. Google Chrome is the first product from Google that has managed to hit this number, and it certainly won’t be the last.

Earlier this year, Google said that Chrome had reached one billion active users, but the number of installs wasn’t shared. Google currently has several products including Maps, Gmail and YouTube that have more than a billion users and we think that it would be safe to say that the 2 billion mark is not too far-off for these apps too.

However, this enormous number of Chrome installs may just be by the huge number of Android devices being sold worldwide as it comes pre-installed on these devices and almost all the users keep using it for their needs instead of going through the hassle of installing another browser. This usage is entirely warranted, though, because of the great features that Chrome offers to its users.