Z4root one-click root was popular back in 2011-12, there were many rooting apps (including Kingoroot, Framaroot) that supported almost every Android device available at that time.

These tools are used to work on Android versions; Froyo, Gingerbread, Honeycomb, Ice cream sandwich, and Jelly bean, but as Android security gets better day by day, these tools may not work on different devices having the latest Android OS such as KitKat, Lollipop, and Marshmallow. But if you’ve got older Android devices, then you’re lucky as these devices haven’t got any official updates in the past, and you can easily root them using the Z4Root app.

Developed and supported by the senior Xda developer RyanZA. It was released in 2010; by that time, it was a handy app as it was able to root almost any Android device based on the version of Android OS. 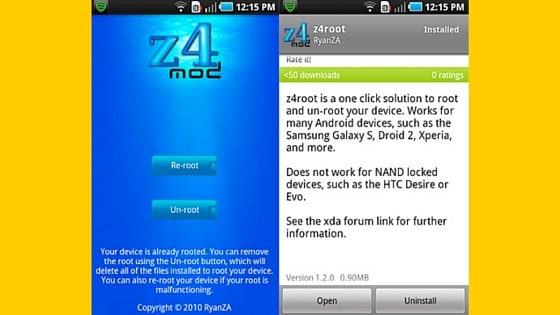 Now it does not support the latest Android flagship devices due to the security improvement and patches in the most recent version of Android OS. However, you can still use it to root your old Android phone.

Older devices such as the Galaxy S do not have active developments. If you’re any of the smartphone owners released between 2010 and 2013, you probably will get frustrated when there is no developer support working on rooting, mods, kernels, ROM, and recovery. Fortunately, the Cyanogenmod and Xda developer community has some ongoing developments, but you need to have root access.

Z4root, one of the most popular Android rooting app, makes it actually easier to gain root access on many Android smartphones, including Samsung, HTC, LG, Micromax. Please note that it does not support all devices from the mentioned brands.

Don’t worry if you haven’t rooted any Android in your life, The rooting app for Android makes it easier to root your phone. All you’ve to do is download and install the APK file. The simple user interface has simple options to Root and Unroot your phone.

Due to strict Google policies, this app is not available on Google Play, but the Xda developer has made it really easy to download the app apk. You can download the latest version here:

Installing the app on your Android is much easier when you know how to do it! Let’s move on and learn how you can install and use it to root your phone.

1. Does it support every model from Samsung, LG, Sony Xperia, HTC, etc.?

2. I am getting virus /malware detected on Google Chrome and various other software, will it harm my device or PC?

Answer: No, it will not, the version made available by the developer has this issue, and it is entirely clean.

Answer: You can visit the official Xda thread to find out more.

4. It is not working on my device. What should I do?

Answer: You should try other apps such as Framaroot, Kingoroot, and Motochopper for Motorola devices, etc.

Did you find it useful? Do let us know and share your thoughts in the comment section below.