If you’re on social media and have a fan following that goes in the millions, you will need to exercise extreme caution when it comes to posting on your wall or sending out a tweet. Even the tiniest bit of mistakes can result in a catastrophe but it looks like Elon Musk must have found out the hard way.

On his Twitter handle, Musk accidentally posted his cell phone number when he called out someone that he wished to speak to. Twitter users at the time that were scrolling through the timeline must have caught wind of what was going on, and we are confident to say that several thousand would have even attempted to give him a call immediately, most likely not to share innovative ideas, but to hear the voice of their idol.

As brilliant as Elon Musk is, he definitely made a boo-boo here, but not to worry. With the numerous features you get with social networking websites like Facebook and Twitter, there is also an option to delete that message. However, the ubiquity of smartphones also means that lots of followers might have immediately taken a screenshot of that message because they might feel that Elon Musk might delete it after realizing the mistake he made. 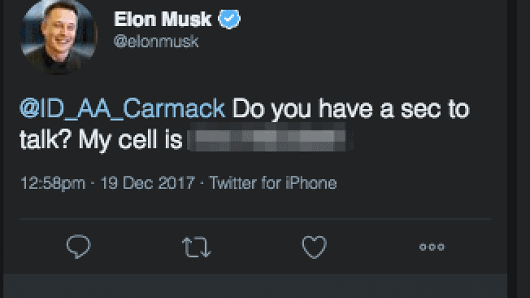 If you wanted to know, the tweet was meant for Oculus CTO John Carmack, and the founder of Tesla might have some great ideas on how to improve the driving experience for Tesla car owners via virtual reality most probably. Obviously, this is just speculation but Musk must have been extremely excited to send out a tweet instead of a direct message to John Carmack.

Also, now that millions of Musk’s followers have access to his phone number, he will also have to go through the pain of changing that phone number and updating everyone important in his life that the number has been changed thanks to a grave mistake.

Golden rule: Avoid posting your personal information on social media. You can do well without the headache.