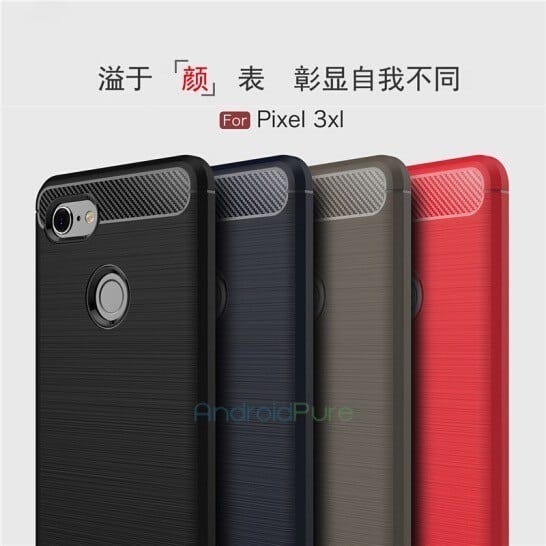 While the Google Pixel 3 will feature 18:9 aspect ratio this year with comparatively smaller bezels, the bigger variant of the model, the Pixel 3 XL will feature a notch design with a 19:9 aspect ratio. The notch is not new. It started with the Essential Phone, that featured one of the smallest notches to date. The trend was standardized with the latest iPhone X. It’s thanks to Apple that all smartphones now have their own line of notch-embedded smartphones.

Let’s put the focus back on the leaked cases of the Google Pixel 3 XL. As can be seen in the images embedded below, we can see the notch at the top of the display with rounded corners. There’s also a single front-facing camera along with some sensors. This is a bit different from Bloomberg’s report that details that the Google Pixel 2 XL will feature dual front-facing camera module.

At this point, the rear facing dual camera sensors would make sense instead of the front-facing ones. Moreover, you can also clearly see the stereo speaker grills in the images. Moving towards the back, which is mostly hidden, we can see that the company is resisting its temptation or pressure from the entire industry to introduce dual camera sensors at the back. Not that the Pixel need any taking into account the best Portrait mode capabilities, but we can always question the possibilities.

However, with Huawei P20 Pro on the market, would a single camera sensor at the back still be enough to win the market? We can’t question Google’s implementation of algorithms in the camera department – it’s just so good. Nothing can be said for certain at this point. There can be alterations made and maybe the company will add a dual camera module in the Google Pixel 3 XL. Apart from this, you also see a rear-facing fingerprint reader, the same position it was on the device’s predecessors.

More on this as it arrives. What do you think? Would dual cameras be released with the Google Pixel 3 XL?

Best Triple Monitor Stands and Mounts to buy in 2019