Samsung has a 23:1 ratio for smartphones and wearables shipped in Q3 2017

Samsung has a Gear smartwatch product lineup, which belongs to its long list of wearables. Though the company has hit back hard with its Galaxy S8, Galaxy S8+ and Galaxy Note 8 smartphones, the company is unable to find the same line of success with its smartwatches.

According to a report from Canalys, Samsung sells a single wearable for as much 23 phones during the third quarter of this year. When compared to Huawei, the Chinese manufacturer sells around 14 smartphones per wearable. However, Apple has taken a huge share of the wearable market because for every seven iPhones it sells, it manages to sell a single wearable, and that is a very impressive figure. 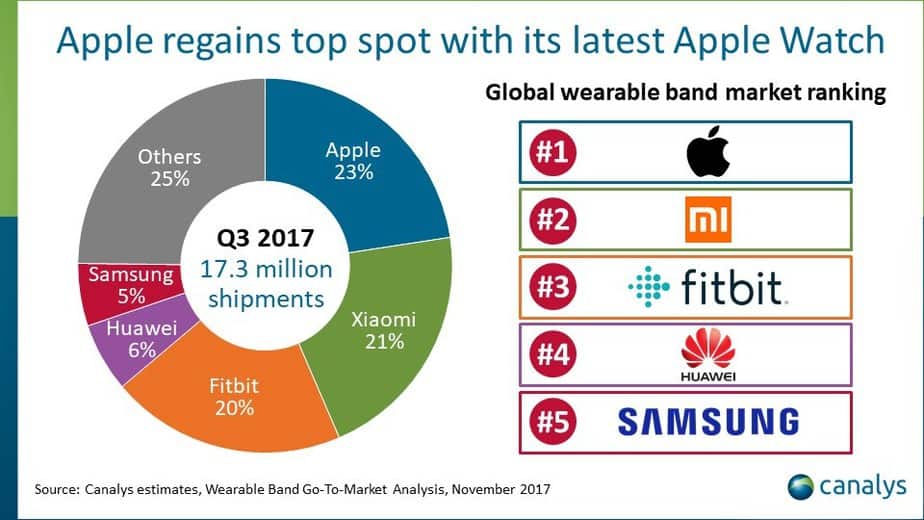 “Strong demand for the LTE-enabled Apple Watch Series 3 has dispelled service providers’ doubts about the cellular smartwatch not appealing to customers.”

According to the report, Apple shipped around 800,000 wearables in the third quarter which featured an eSIM. Samsung is pretty much being killed by Apple in the wearables market, with its Gear S3 being the only popular product. Samsung currently has a market share of a measly 5 percent market, compared to Apple’s 23 percent. The reason for that is Apple has a controlled environment for this sort of stuff.

It makes its own hardware and software while Samsung has to rely on Android Wear and its own Exynos chipsets, which are a terrible combination when it comes to battery life.

The same argument can be made with Apple’s iPad lineup. The company sells more tablets than anyone else in the market and it effortlessly beats Samsung in this category.