After resting in the development phase for quite a while, Samsung has finally unveiled the Galaxy Note 9. While the device is pretty similar to the Galaxy Note 8, there are a bunch of new additions which sets it apart from the rest. While some may regard it as an incremental upgrade, others would see a brand new device with an all-rounder approach. So let’s dig in and explore more on what the Samsung Galaxy Note 9 has to offer.

The first aspect of the device is devoted to performance. You’re getting the latest Snapdragon 845 which is powerful enough to get you through anything you throw at it. Coupled with that is 6 or 8GB of RAM depending on the variant that you are opting to choose. You get 6GB of RAM with the 128GB storage variant and an 8GB variant with 512GB of storage capacity.

To be honest, Samsung has done right with the storage this time. Half a terabyte of storage on a smartphone is crazy with Samsung’s own notion of movie storage capacity. Moreover, the company is also said to launch a new 512GB of SD card which when housed in the Samsung Galaxy Note 9 will give it a whole 1TB of storage capacity. That’s more than most maxed out laptops on the market.

Apart from this, the battery capacity has been increased to 4000mAh as well which according to Samsung will get you through the day. Since the device is plenty powerful, Samsung has also incorporated a new water-carbon cooling system along with a smart performance adjuster. So that’s a major improvement for the company.

Now moving towards the camera department, you’ll get a dual 12MP pixel sensors, both of them with optical image stabilization. One lens features an aperture of f/2.4 with 1µm pixel size, AF, and OIS. The second lens features the S9’s variable aperture module which can switch between f/1.5 to f/2.4. It also supports Phase Detection AF and OIS. Super Slo-Mo is also part of the package so it’s basically a win.

Now, moving towards the design aspects of the Samsung Galaxy Note 9, the overall form factor is the same as its predecessor. You’ll find the dual rear-facing cameras placed in a horizontal fashion while the fingerprint sensor is positioned below the camera module. This is an improvement from last year’s design as the fingerprint sensor was too far up to reach.

At the bottom, you will find the USB-C connector, speaker grill and a headphone jack, which we all know needs to be mentioned at this point. The Galaxy Note 9 now boats a Stereo Speaker, which is the loudest ever in a Note lineup. There is also that Bixby button on the side, which sadly isn’t customizable. The SIM and microSD card slot is located at the top of the device and a power button on the right-hand side of the Note 9. 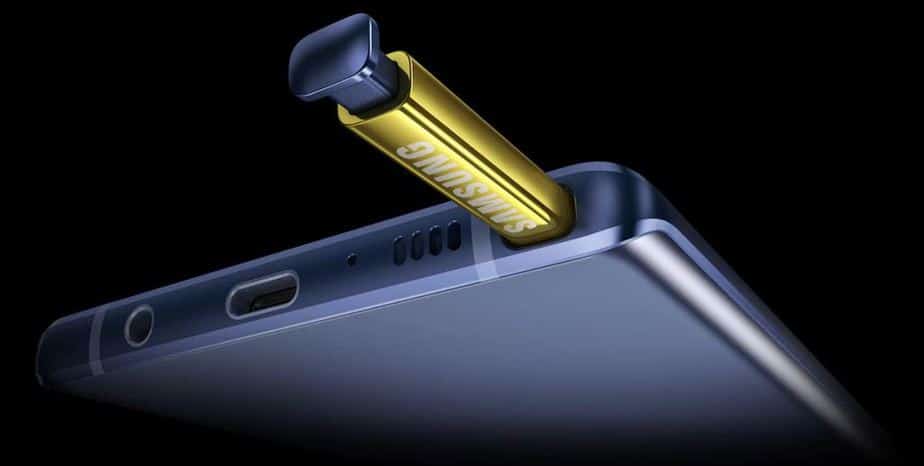 The display is one of the most major aspects of the device. The Samsung Galaxy Note 9 features a beautiful 6.4-inch sAMOLED display with QHD+ resolution and we can be sure that this is one of the most beautiful looking screens on a smartphone to date. It comes at a pixel density of 516ppi. The top and bottom bezels are slightly thinner as well compared to the Galaxy Note 8 from last year. It is available in Lavender Purple, Metallic Copper, Ocean Blue and Midnight Black.

One of the major selling points of the Samsung Galaxy Note 9 is the S-Pen. It has been enhanced with ample features and now acts as a remote to the device. You can customize the button on the S-Pen to perform different functions in different apps and much more. It is now a low-powered Bluetooth accessory which is charged from within the Galaxy Note 9.

We would take out time to also note that Fortnite is coming to Android with special care given to those users with Galaxy device. DeX support now also comes built-in and does not require a separate hardware, just plug it in and rock it. What do you think about the Galaxy Note 9? Would it replace your current smartphone?

How to Factory Reset Samsung Galaxy A52