Samsung, one of the biggest company in the market dealing in electronics. It first launched an impeccable mobile VR, but then Google launched its Daydream Google VR headset. The Gear VR was itself very innovative which took people into complete awe.

Gear VR was something which was completely wireless, had amazing head tracking and had wonderful library content. It had several features such as a gyroscope, accelerometer, proximity sensor, geomagnetic sensor, etc. Then, again this Korean company was very much determined to make its space back in the market by launching the flawless Samsung Gear VR Controller.

To make it top-notch this time Samsung teamed up with Oculus VR company in designing this fantastic gadget. It gives its users unbelievable virtual experience and guesses what? The existing owners of Gear VR can take advantage of this awe-inspiring upgrade as they do not have to buy a whole new headset to enjoy the most mesmerizing virtual experience. 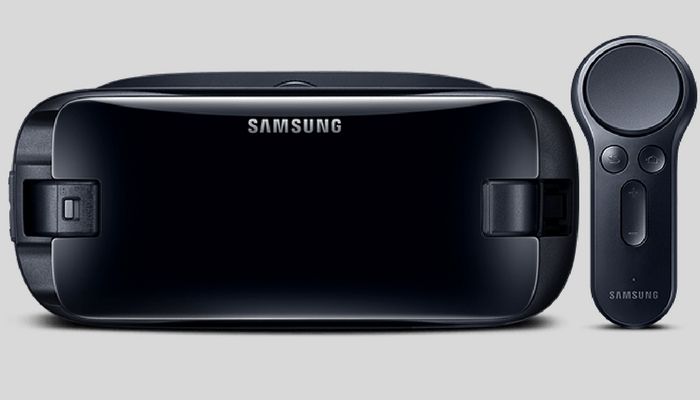 The hardware of this upgrade is a little bit more ergonomic to hold as it is slightly angled. This is a very minute thing to notice but gives a very lasting comfort for really long gaming sessions. Its touch is smooth so as to support the virtual experience. This thing is felt as soon as you hold the Samsung Gear VR Controller. It holds the usual buttons such as home, volume and back buttons. This provides a lot of ease as you can reach any button very easily and without straining your fingers.

There is a button which makes this Gear VR Controller very unique. It renders an additional option of input which is not present in any other of its kind. It not only helps you in gaming but also helps in a natural way out through the controller. And, the most important impact of this trigger button is to concrete the idea of stupendous virtual experience. Also, it is mandatory to mention that this year’s model has been improved progressively to fit in with Galaxy S8 as well, which is a plus without any doubt.

This inevitable invention gives its user a virtual experience which cannot be denied in any circumstance. It keeps a person’s mind occupied all the time with what he/she experienced. It leaves the pro gamers in a magical world of gaming. This means you are all set to use this amazing controller if you want to land in the world of mesmerizing gaming. If you want to have an experience that you never had before then this Gear VR Controller is the thing which you need, nothing else. You will go through something which you will not regret in the future at any time.

The usage of this controller is several step process yet easy for a true gamer. First of all, you need to put in 2 AAA batteries in it and connect it to the Bluetooth. Then, the home screen of Oculus app walks you through a further more easy calibration steps. Then, you have to make a few movements to settle things down. This whole process is neither very complicated, nor it takes too much time, so time-efficient it is! No issues at all.

Moreover to your wonder, 20 apps in Oculus store support this new controller, isn’t it amazing? In addition to this, you will be enthralled to hear that this number is growing up to 70 in the future or maybe more, who knows? Just to make you carefree, the controller’s tracking motion is all good to go, I mean it’s no doubt a great thing for you to opt for. Its movements are very accurate as it responds to slightest of the movements which mean no more mismanagement with your targets in the games.

Also, more response to your really swift movements mean an ultimate virtual environment, No? The remote is very precise as well. Also, if you choose the repositioning of your arm while playing, you can re-orient the controller as well by holding down the Home button. It is ideal for specifying your targets, also helps to navigate through the Oculus Homepage.

It becomes far easy to browse the web and do surfing on the internet. You have a keyboard as well, that to a virtual one this helps you get along typing as well- making your life and gaming experience both as easy as they seem to be.

Moving onto the pricing strategies are chosen by the company, they are inexpensive and obviously affordable by existing Gear VR holders. In comparison with others, it is slightly expensive but still in the affordable range, maybe touching the upper line of affordability. The Controller alone costs

The Controller alone costs $39 and with the headset, it totally costs $129 while Google VR headset costs $79 but Samsung has its own benefits which we have already discussed in detail.

Looking at its other side, the landscape of mobile VR is becoming slightly more complex and complicated which means you need to be very mindful when you are buying a mobile VR headset. The main reason behind the suggestion of ‘mindfulness’ is that it is only compatible with Samsung phones, for now, maybe there will be an improvement in this aspect in the future, after all, we should be very positive at all times.

It has more tactical value now, making it easy for people all around the world to enjoy the world of fantastic virtual ambiance. The pointer hereby will make people grow fonder with the technological advancement. When we talk about the simple shape of the controller, we become obsessed with the famous phrase ‘simplicity Is beauty’ and also, the simpler design makes rather convenient for users to take advantage of it. Another fruitful addition is the change to installing two AAA batteries instead of USB charging cables, in short, it became more handy and portable in a sense.

Well, going further I fear I might lose your interest because I have put my hands on some of the negative points for this new invention. Mainly, I’ll say it’s sometimes very stressful to handle loads of accessories given in by Gear VR already and now this Controller as well. You always fear you will lose them one way or the other and you might even be scared of opening the box, I’m bluffing at the moment- once you buy it, you are definitely going to rip off the box at once or be a little gentle maybe!

Furthermore, Samsung doesn’t seem much radical about their thinking on the technological advancements because if they were really into it, they would’ve launched something far ago in the past. In my opinion, they lag behind a little too much with what world is going into, and a massive rationalized advanced especially when you talk about the technology. On the other hand, it’s a great thing that two unimpeachable companies, Samsung and Oculus, have joined their hands to bring about this great initiative of Gear VR Controller to bring about ease for staunch gamers. We should acknowledge the fact that the core system held by the two companies is immaculate and unbeatable to an extent in the present era.

In the core and crust, it is a good move and should be appreciated by everyone or the gamers at least for giving in the perfect virtual experience, easy and handy!