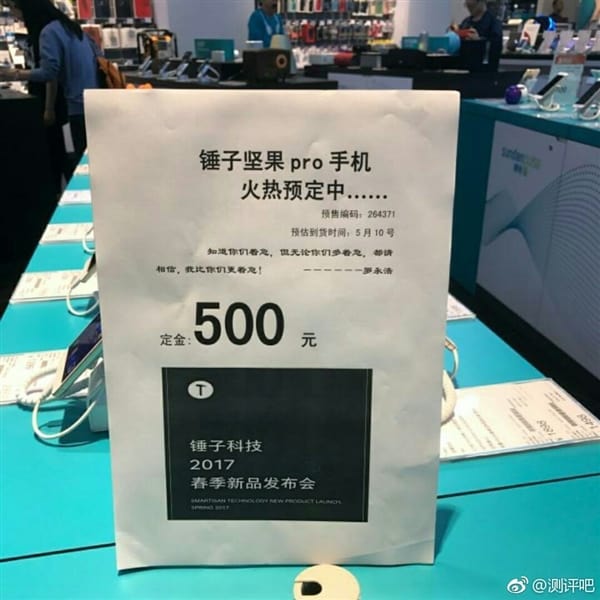 Smartisan will be launching on May 9 a 5.5-inch dual-camera phone on for 500 Yuan (around $72) in China. This budget phone is rumored to have two cameras, a fingerprint positioned at the front and run the Qualcomm Snapdragon 626 chipset.

Smartisan currently has the M1 and M1L hi-end mobile phones, is preparing to launch sometime later the T3 and T3X updated line of top-end phones powered by Qualcomm Snapdragon 835 and just before that is releasing a very affordable handset.

Smartisan Pro (named in China as Smartisan Hammer Nut Pro) has a similar design to Apple iPhone with rounded edges, a circular home button (which may function as a fingerprint sensor) and a dual-camera setup on the rear (12MP + 8MP) for shooting FHD videos. The selfie camera is not exposed, but it should be another 8MP unit.

A Smartisan exhibition in China today exposed the pricing of the handset, and it sits at 500 Yuan. If that’s correct, then the phone may not have an FHD display but be limited to 720 pixels. However, there may be variable storage versions that may include 4GB of RAM and 64GB. But for the starting price of $72, don’t expect more than two gigs of RAM and 16GB of memory.