The iPhone X is Apple’s biggest transformation of the device since the original iPhone was introduced back in 2007. The device brags an all-screen design with a 5.8-inch edge-to-edge panel at the front. In addition to this, the iPhone X is sandwiched in glass that gives it a more premium look and feels. Moreover, the device has proved itself to be quite popular for users across the globe. While the screen is bigger, the footprint of the device is smaller than its last three predecessors. However, Apple seems to be taking the device to the next level. 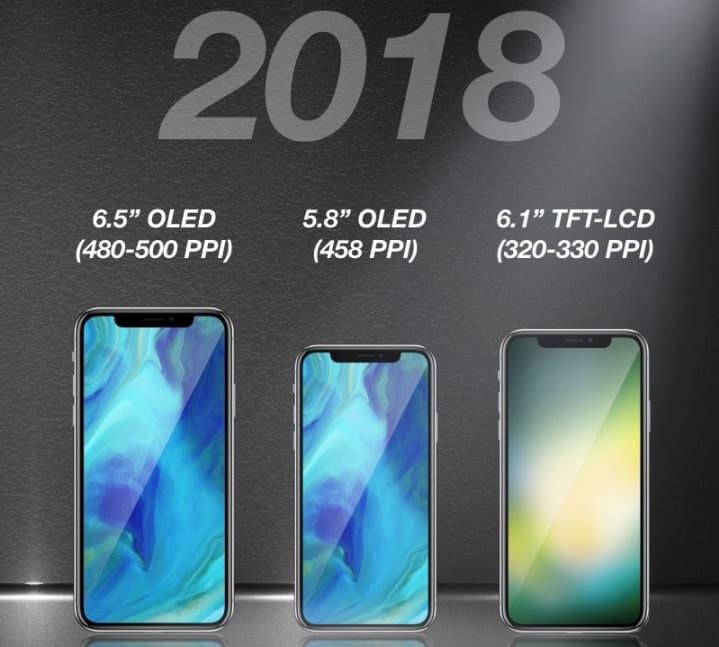 Three New iPhone Models To Come Next Year, Each With A Different Display SIze

While Samsung this year around has taken things up a notch with its 6.3-inch screen on the Galaxy Note 8, it seems Apple is also looking into the scenario. As it can be presumed, some users might want to use an even bigger display on the iPhone, and the latest report suggests the same.

Ming-Chi Kuo of KGI Securities has reported that Apple is currently planning on launching three new iPhone models next year. Not only this, but the display size of the handsets will vary. The often rumored iPhone X Plus is said to house a 6.5-inch OLED display, 0.1-inch bigger than that of the Galaxy Note 8. Furthermore, it is said to feature the pixel density between 480 to 500. In comparison, the iPhone X has a PPI of 458. In the end, you can conclude that the display on next year’s iPhone will be crispier.

“Two new OLED models target high-end market; new TFT-LCD model aims at low-end & midrange markets: We believe the major hardware difference in the two new OLED models is size, in a bid to satisfy various needs of the high-end market. The new TFT-LCD model will differ significantly from the OLED models in hardware and design specs (for instance, the PPI will be lower). The primary selling points of the TFT-LCD model may be the innovative user experience of an integrated full-screen design and 3D sensing with a lower price tag (we expect it will likely be US$649-749).”

The remaining two devices are also said to come in new display sizes. The second device, which will be a follow up to the iPhone X will feature the same pixel density and display size. However, the third iPhone model expected to launch next year is where things get interesting.  The last, or third, iPhone will feature a display measuring 6.1-inches and will said to have a pixel count of 320 to 330 per inch. This will be more or less the same as the current generation iPhone 8 or 7.

The iPhone model with an LCD panel is expected to be oriented towards the low-end and mid-range markets. The OLED iPhone models, on the other hand, are meant to fill the high-end market. All in all, if it pans out the way it is expected, Apple will release three new iPhone models in the year 2018, each with a different size. Does that mean the iPhone 8 and 8 Plus are last of their kind? Possibly yes, as the device’s feature gigantic bezels and a Home button which is absent on the iPhone X, replaced by Face ID. Nonetheless, it’s too early to jump to any conclusions, so we would just have to wait for the final product to arrive.

As for now, share your thoughts on the three new iPhone models expected to come next year.