It doesn’t matter if you are a thrill seeking life caster, an aspiring aerial photographer or any type of videographer. The market has never offered as man affordable drones before.

Until the advent of GoPro Karma, drone market did not have too many worthy contenders for being the best drones in this price range. Though expectations were extremely high from GoPro Karma, initial reports were not positive as large numbers drones were withdrawn from the market on technical issues.

However, after issues being resolved, they are back in the market and are trying to compete with Mavic Pro.

Mavic Pro vs GoPro Karma: Clash of the Titans 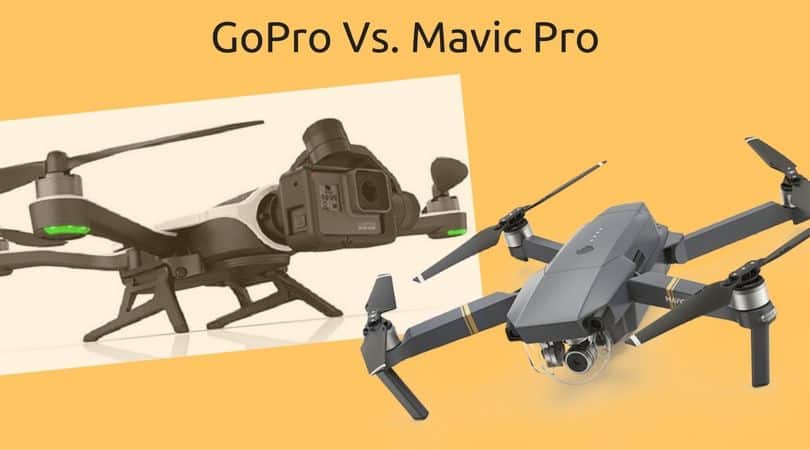 Top flight category of the drones had few medium-tier models with DJI Mavic Pro leading the market having amazing specs and stability in the flight.

However, the emergence of GoPro Karma has certainly ignited the battle between the top notch portable drones category. With GoPro Karma, two same category drones have clashed to compete for the share of the market. It is indispensable to look into the qualities of these two drones to highlight their technical superiority.

Looking at these drones, it brings up the question, which is the better of the two? In recent times, GoPro Karma has gone on to advertise the drone at large scale to reach larger audiences.

Being first in the market, DJI had dominated the market and had created a niche. Some of the main qualities of the DJI Mavic Pro which made it stand out in the crowd are its cheaper price tag, portability, an acceptable level of loudness, and ability to fly with stability, and delivering 4k footage during the day even during the windy conditions. DJI Mavic certainly has mind-blowing specs at this price range.

While GoPro Karma has been marketed sighting the advantage in ease to use. Most importantly, it requires no pre-experience to fly as it offers an easy system to monitor for new users. In addition, makers believe that it has versatility attached as it is able to use the GoPro Hero 4 and 5 with it.

There is no denying that DJI Mavic Pro has established loyal users based on some effective and lovable features. Now, how much a comparison can be drawn between these drones is discussed below:

Comparison based on Technical Specs:

Some of the main specification of GoPro Karma and Mavic Pro are discussed here in detail:

There have not been many differences as far as the specs are concerned. But, the in-depth and detail analysis will reflect the pros and cons associated with these two drones trying to compete out each other in the market.

As I argued earlier GoPro Karma has been trying to sell its drone based on portability and easy to use design. While, on the other hand, Mavic Pro is also portable but a question arises that how portable is GoPro to give serious competition to Mavic Pro?

It seems that Mavic Pro certainly has a definite edge over design & transportability. Though both are folding drones, easy to carry, Mavic is very light & folds into for small size as compared to GoPro. Nevertheless, GoPro is smaller than some of the other drones available in the market and easy transportable but not as convenient to carry as Mavic Pro.

Designs of these two drones clearly reveal that portability is the main feature to attract the targeted audiences. That’s why GoPro management opted to showcase portability in its major advertising campaigns.

The market analysis reveals that existing drones in the market such as DJI Phantoms or Yuneec Typhoon are heavier as compared to these drones. Therefore, DJI Mavic Pro and GoPro Karma are the most desirable options for those willing to buy easy-to-carry drones that are equipped with high-quality cameras.

GoPro Karma has a better camera of two and there are no two opinions about it. In my earlier post, I had stated that Phantom Pro 4 had a far better camera than Mavic Pro, same is the case here again. GoPro’s fully fledged Hero 5 Black camera is superior to DJI’s built-in camera. Mavic Pro lacks on quality and number of burst shootings. Besides, it has far wider lens giving it a clear advantage.

GoPro’s fully fledged Hero 5 Black camera is superior to DJI’s built-in camera. Mavic Pro lacks on quality and number of burst shootings. Besides, it has far wider lens giving it a clear advantage.

Since GoPro has slightly higher FPS at FHD and doubles FPS at HD, resultantly, giving it an edge on capturing high-quality videos.  Though, it does not come with a built in camera but has greater stabilizer and gimbal.

Therefore, it can be stated that GoPro Karma camera quality and the image has exceeded expectations of most of the people and making it a clear winner as far as the camera is concerned.

Mavic Pro has the flight time of 27 minutes as compared to 20 minutes of GoPro Karma.  Battery for GoPro Karma takes an hour to fully charge and unless a spare battery is not kept, it may not be able to produce the desired results. However, with Mavic Pro, flight time is considerably longer indicating a better battery. Therefore, making it a clear winner based on flight timing.

However, with Mavic Pro, flight time is considerably longer indicating a better battery. Therefore, making it a clear winner based on flight timing.

Though, it should not be mistaken that both of these competitors are close enough. But, the performance of GoPro Karma is not as good enough as Mavic.

Since GoPro Karma has a poor battery life as compared to Mavic Pro, but the camera for Karma is superior. Therefore, both are the winner in their respective departments but further analysis will pave the way for a more clear winner.

There are 7 minutes of flight time difference in favor of Mavic Pro. Though there are drones which can have more time in the air but price limitations make them unlikely purchases for average drone enthusiasts.

Operating range for Mavic Pro is 7 kilometers (KM) of seamless experience as compared to only 1 KM for GoPro Karma.  This is too far behind for a drone of this price. It may have a better flight time & operate range as compared to other options on the high street. But, it is certainly not at par with Mavic Pro in operating performance. Therefore, Mavic Pro is a clear winner in the performance department.

Comparison based on speed reveals that machine and system used in Mavic are more powerful than GoPro Karma. It has superior ability to breeze through the windy and difficult weather conditions.  Top speed for GoPro Karma is 34mph which is very slower than 40mph of Mavic, which clearly gives it the advantage.

Controller for GoPro Karma has a 1km range and is very much different from Mavic Pro. Later have antennas which can be folded in.

The phone used for operating purposes can be detached & arms can come together. In its collapsed shape, it is merely half the size of the folded drone. On the whole, it is simple and very easy to use.

GoPro Karma has a video game like pad having 2 joysticks and an LCD display of 5-inch but it makes GoPro Karma controller bulkier than Mavic Pro. However, it gives nice 720 display, and ability to control moves. But, with no follow-up mode, it makes Go Pro very unattractive as compared to Mavic pro.

Based on facts discussed above, it emerges that Mavic Pro is a far better machine as compared to GoPro Karma. Though, it is an established fact that the camera performance of GoPro Karma is awesome and superior to Mavic Pro. But, it lags in almost all other departments making the case in favor of DJI Mavic Pro as a better drone in the same price range. Some of the detailed pros and cons are summarized below:

And The Winner Is…

Close analysis of the mechanics and specs of the two drones depicts that Karma is undoubtedly a wonderful camera-optimized quadcopter but having some drawbacks due to elementary controls.

Crucially, it has no sensors, or extra cameras making it highly prone to crash. It is one of those drones which are designed to accommodate beginners.

On comparison with Mavic Pro, other than camera advantage, GoPro Karma has no noticeable specs and features to out gun the Mavic Pro. Therefore, detailed analysis depicts that Mavic Pro is far better drone than GoPro Karma and is a clear winner in most of the departments.