Cheap drones under 100 are good for inexperienced pilots to improve their flying skills and then later switch to high-end drones for aerial photography.

The market is flooded with drones in this price range. Depending on the needs, inexperienced pilot and income constraint, people look out for the models which could satisfy their needs at the lowest budget.

Professional drones have smooth operating manual paving the way for easy flying, damage in the flight due to inexperience becomes imminent. They are also usually heavy which could cause severe damage to drones or a person. The best thing to do is find a drone within reasonable price range.

It is our dedicated buyer’s guide for users who are looking to buy an inexpensive drone which can be bought at less than $100 on Amazon. Luckily, we’ve picked seven drones with essential features you could expect for the price. 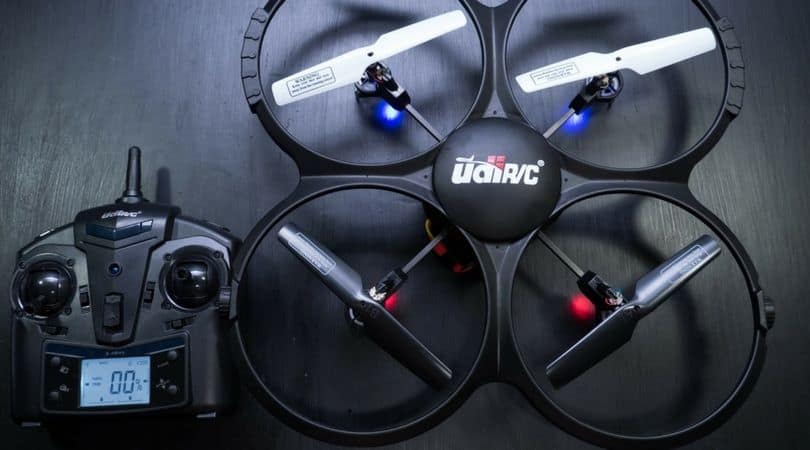 UDI 818A HD+ is top-rated drone available in the market under $100 that is packed with everything a drone should have in this price range.

UDI 818A is reliable, easy to handle, and durable. It’s prop guards which cover its entire machine and frame are extremely durable.

Durable and reliable props make it comparatively safe in case of a crash. The quick detailed analysis of this device reveals the quality which makes it worth a buy for beginners.

Some of the amazing features include one key 360 flips which make it attractive to onlookers. Besides, it also sports headless mode. It also incorporates rather, unfortunately, a low battery alarm and LED lights.

However, this gets compensated with solid HD camera. Flight time is 9 minutes, and it can cover 50 to 100 meters. This camera can record 30 frames per second.

Without a doubt, this is the best camera available under $100. As there is no mechanical stabilizer attached, it may at times gives in dissatisfactory results. Besides, it may be difficult to control it on windy days due to lighter weight.

In a nutshell, UDI 818A HD+ is a great machine for beginners having the ability to make the use joyful and full of fun. It has hundreds of reviews on Amazon and is highly recommended. 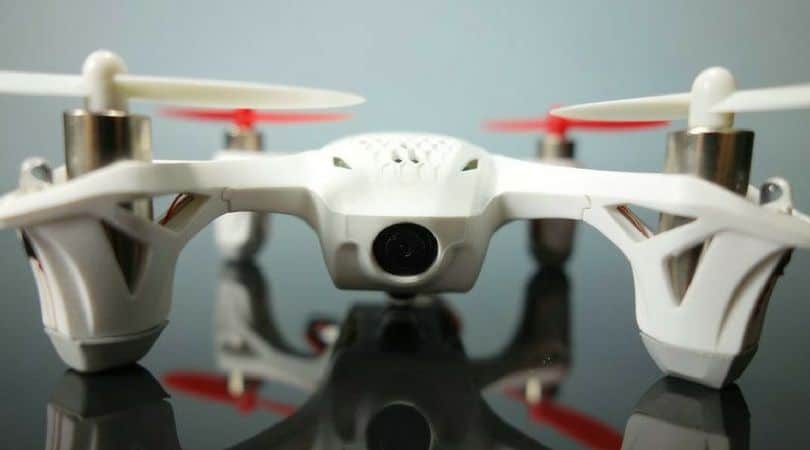 Hubsan X4 is also one of the most reliable and cheaper drones you can buy for $79.99.

It has an impressive 100-meter range. It also has all the essential features which one would like to have. This range is better than any other quadcopter in this price range. Despite being a low-cost drone, it comes with a 2MP mountable camera.

It takes 30 minutes to charge and has the flight time of 6 to 8 minutes. But, critics believe that if the camera is on, it may last only 5 minutes in the air. Battery and camera are not removable.

Hubsan X4 is also cannot be operated in windy conditions at all and is considered perfect for indoor flights. It has almost no ability to resist slightest of the breeze.

It has painted propellers and LED lights which make it easy to determine its position in flight. Camera quality is also impressive, and FPV is considerably better which may not be expected from drones of this price range.

The range of FPV is nearly 100 meters. Its transmitter has the 4.3-inch screen. It is also extremely durable, and it may take the ton of crashes to down it permanently. 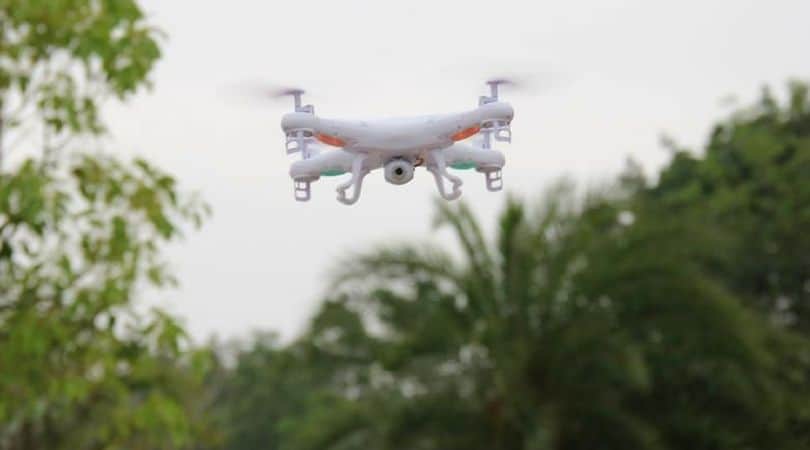 Amazon review, observers and critics alike believe that updated version of Syma X5C-1 has a built-in microphone and HD camera. It is one of the best-selling drones in the market and is highly recommendable.

Syma X5C-1 has 1.5-pound weight with 3.7V 500mAh LiPO battery. However, the downside is that battery takes 90m minutes to charge. If the wire of the camera is disconnected, it makes it lighter.

The flight time for Syma X5 is around 7 minutes. But, removing the wire and adding extra battery may increase the flight duration. It can be controlled in any direction, up, down, left and right.

What makes it stand out among the other two drones is its endurance in windy conditions. However, only an experienced pilot can deal with it appropriately.

The downside risk is that at low voltage it may shut down and plunges to the ground. It is far better to use the timer to ensure that it gets enough time to fly back to you. Camera quality is not professional, but it can take clear photos.

I must reassert that Syma X5C-1 is the cheaper drone with camera. I would like to suggest that once you learn how to fly it, you can remove camera, landing gear and prop guard. It will lose the weight increasing motility and flight time. 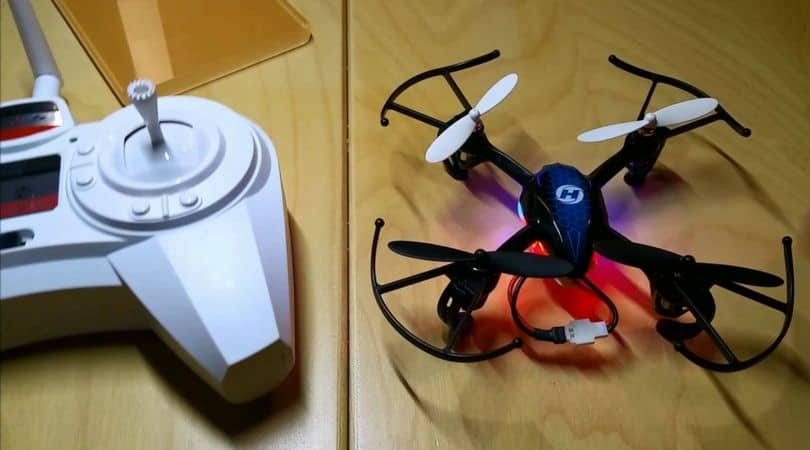 Holy Stone HS170 is a best-selling drone on Amazon’s quadcopters category. It is available at very reasonable price under $50.  It can be a good alternative for improving your drone flying skills.

It’s RC camera has a range of almost 50 meters. Unlike Syma X5C-1, it has a rapid charging time and can fly for 6 to 8 minutes.

At times, it can difficult for beginners and may bounce and flip on landing. Besides, bulky controller and hanging battery wire don’t make it a complete attraction. But, its other operating functions make it a decent buy.

It looks effortless and smooth in the air and can resist the windy conditions using its 6-axis gyro stabilization system. It is a great buy for amateur kids or adult on trips and family vacations.

Also, headless security system makes it easy to fly for even an inexperienced pilot.

To conclude, Holy Stone has amazing features which make it easy to operate and control. It can perform flips, tricks while making beautiful videos and pictures.

Though like all the drones of this price range, there are some drawbacks, however, its robust and responsive performance makes it a formidable choice. If one wants to experience enjoyable and smooth flights than Holy Stone is a perfect buy. 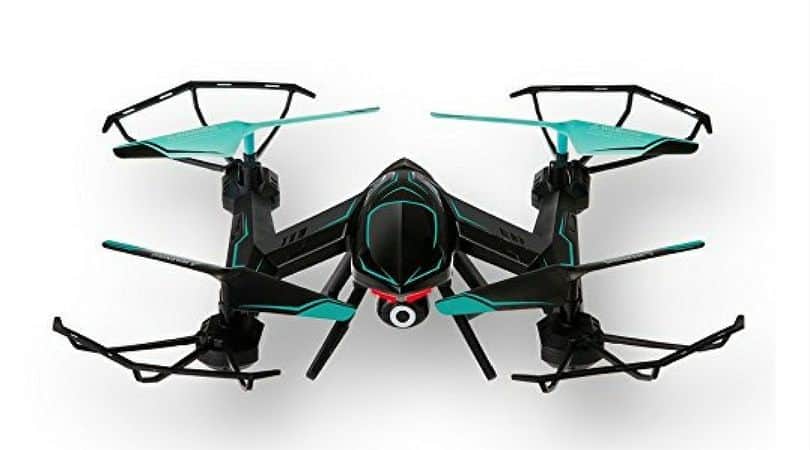 It is designed in a way that even in the night sky a person can get attracted to its exotic style. It provides the first visual flight experience using the FPV software.

The real-time transmission allows the pictures and videos to transmit to the phone. By using its headless mode, it can automatically identify the direction of the controller and can be easily recalled. It can quickly perform a variety of flight actions. Stability of Rabing RC is ensured using the latest 6-axis gyroscope system.

The disadvantage is that battery takes an estimate of 100 minutes to charge and it weighs only 0.9 kg.  It has a flight time of 8 to 9 minutes and looks beautiful in the night sky with its night lights.

Though camera quality is not good as you should expect for the price! SD card cannot be used in the video camera, but the smartphone can cover this deficiency.

It is very sturdy, and if crashes are not from too high altitude, it does not get damaged. It is much easier to control using the app as compared to the controller. Besides, the controller uses the battery in quick time. It also does not make too much sound which makes it worth a buy.

In no wind environment, it is pretty stable, but on windy days, it can give some issues as it struggles to go up. Overall, it is a pretty good quadcopter and has received good reviews on Amazon, eBay, and other websites. 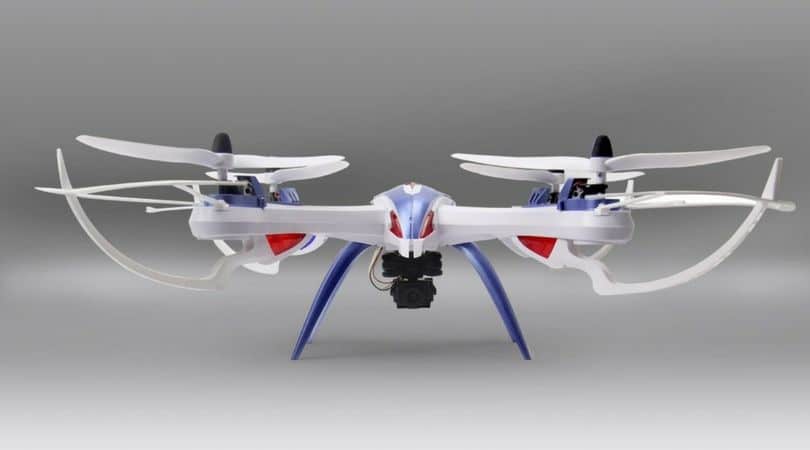 Tarantula X6 makes the air tricks a real possibility using the six-axis gyro which makes it flight relatively stable. If someone is looking to buy a low-cost and ‘easy to fly’ drone, this can be a good option.

The cheaper model comes without a camera, but it can be purchased separately. The best thing about Tarantula X6 is you can even mount a GoPro camera which is fantastic.

Tarantula X6 is easy to fix as its motor can be easily replaced. It is only mentioned out of caution because RC motors have a tendency to get burnt down sometimes.

Like other drones in this price range, it covers distance up to 100 meters. Tarantula comes up with an impressive 7.4V 1200mAh LiPo battery which helps the drone to stay in the air for maximum 12 minutes in stable conditions.

It is one of the stable drones one can buy and has a very positive word of mouth reviews as users have loved it over the years. 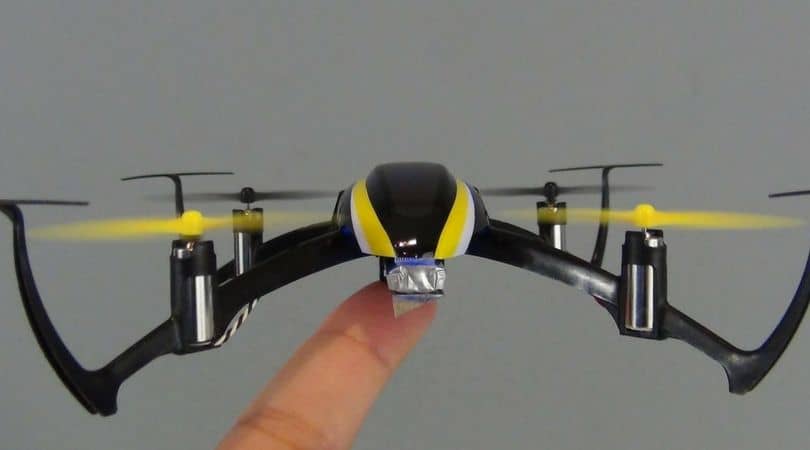 Blade Nano is the drone which has received rave reviews from all around. It has an incredibly sleek design and is a perfect example of how an entry-level drone should be.

Other than the design, close inspection of its function reveals many positive things about it. One of the main features is its sensor assisted flight envelope technology which helps the drone in agility and stability.

The flight time is lower than the average duration of its other competitors 7 minutes because it uses a small battery-150 mAh 25C Li-Po Battery.  However, the positive aspect is quick recharge time of fewer than 30 minutes.

On the downside, unfortunately, it is not an RTF model which makes it a BNF model. It means it would need to be provided with a transmitter. There is an option to buy with the controller, and for that purpose, one must order an RTF (Ready to fly) version. However, users, who already own a BNF (Bind and Fly) it looks like a solid option.

It is so much fun to fly, and not only beginners but the veterans and drone enthusiasts can have fun using this machine.

It can climb up speeding and has a controller with precision. It also responds quickly and swiftly to commands.  It also has the sensitivity to the wind which makes it only fit to fly in stable conditions.

Blade Nano is arguably a good drone out there without a camera. The best thing about this little machine is its responsiveness which can take it anywhere.

Finally, don’t forget to let us know and share your favorite drone under 100 based on your experience. We would love to hear from you for any suggestions and recommendation.